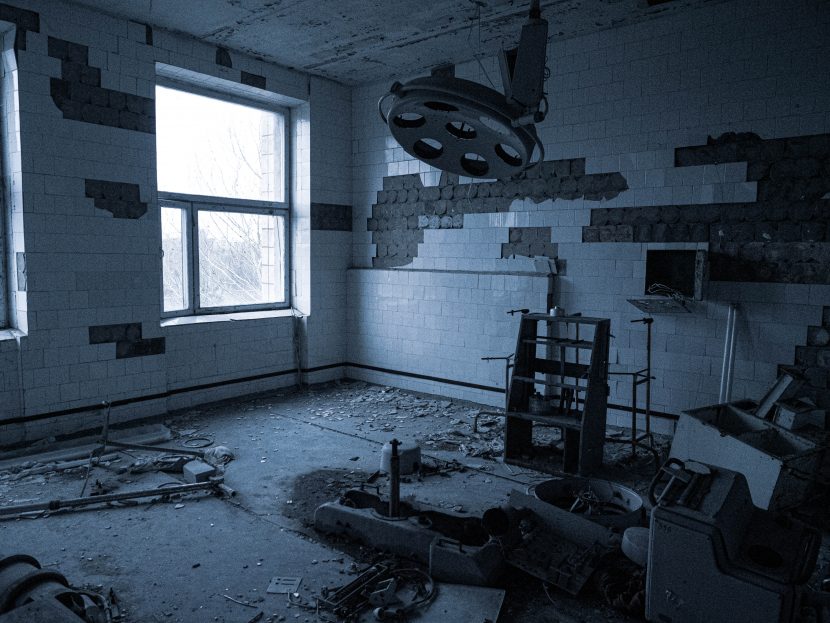 I’ll admit that a day tour to Chernobyl wasn’t the first thing that came to mind when I knew we’d be spending a few days in Kiev. However, the moment I realized that was doable, it was as good as booked. Chernobyl and more specifically the city of Pripyat and the exclusion zone have been a source of fascination for me for some time. I think it taps into the same place as most apocalyptic stories. Chernobyl even begins as a story of epic human folly just as most of those stories do. Of course, everyone knows that zombie movies at their essence aren’t about the zombies, they’re about the survivors. It is imagining a world that has decayed in our absence. We can see glimpses of that occasionally in a small scale in the real world: abandoned shopping malls or theme parks, for example. You can picture the throngs of humanity that once moved through those spaces… now empty, rotting. Well, the city of Pripyat is such a space, but on a scale like no other.

On April 26, 1986, the world’s worst nuclear disaster occurred very close to the town of Pripyat in the Chernobyl power plant. Something I didn’t appreciate prior to visiting there was how close these two places are together. The town of Pripyat was actually built specifically for the workers and families of the power plant. As such, the town is extremely close, only a couple minutes up the road. If you’re interested in specifics of what happened in 1986, the HBO miniseries is extremely well-done, has a lot of footage filmed on location, and seemed to be well-endorsed by everyone we spoke to.

So let’s go through the tour a bit… we booked a private tour and it was just the two of us. I asked in the morning about flying a drone and was told that a permit from the military was required and that typically took about two weeks. Nevertheless, my guide said it wouldn’t hurt to put in a request since there are very few visitors. I had to send a picture of the serial code and model, etc. By the time we arrived at the outskirts of the exclusion zone, incredibly, word arrived that we had an official drone permit. We retrieved some very official documents from the military there and signed some forms and I was good to go with my drone. Before leaving the exclusion zone, I had to show my drone footage to a senior Ukrainian military officer and have him sign off on the form for us to be able to leave. It felt like a formality and was very pleasant. Again, literally every encounter with authorities in Ukraine was absolutely top notch and professional. Touring Chernobyl privately at a time with very few other visitors really added to the ominous nature of the place though.

As you start to move into the exclusion zone, for a while it just seems like you’re driving through dense pine forest. After a while, you begin to notice little interruptions behind the trees… houses. It’s jarring, and you start to see these old abandoned country houses in a way that is very odd. Our first stop was just to pull over randomly and walk down a little dirt path and look around in some houses in a little Soviet village on the outskirts of the exclusion zone. These homes still had a lot of remnants left behind. The most striking thing was piles of newspaper or mail that was of course all dated to April 1986. It reminded me of stopped clocks in Hiroshima.

The tour included stops in Chernobyl “town”, which is a makeshift grouping of more recent buildings or older buildings that have been maintained for military that are stationed there. Next up of course was the power plant. For that, we basically made a loop and got a good look at the place before moving on to Pripyat City. This also provided some perspective on things like “The Bridge of Death” a bridge just up the street from Pripyat town square that provided a view of the power plant. On the night of the disaster, many people walked to the bridge to have a look at the interesting colors drifting into the sky from the “fire”. Every single person that went to the bridge to have a look subsequently died. Pripyat itself is fairly large and, if time permitted, I feel like I could spend days just digging around. For the tour though, we took a couple drone flights, played around in the funfair, and messed around in a random apartment building. Finally, for the real highlights we went to the Kindergarten and the Hospital.

Having been to all this, having seen all of this… this is one of the few tours I’ve been on that I would pay to do again. I enjoyed it that much. One day didn’t feel like enough. It’s really hard to describe how fascinating the place is. When I found out that the exclusion zone in Belarus is actually LARGER than that in Ukraine and is open to visitors, that makes me pretty stoked to visit there. I’ll get a visa somehow! Anyhow, here are some photo selections from the tour:

We stopped in a village on the outskirts of the exclusion zone. This is the largest building, as in most Soviet-era towns, the "Palace of Culture".

Inside the "Palace of Culture"

Lots of random stuff inside the homes around the village

We had just been talking about Soviet-era food shortages and lousy coffee and their "Indian coffee" was mentioned... sure enough, we found some empty cans in one of the nicer homes.

"Duga Radar"... an OTH (over-the-horizon) system that monitored for incoming ballistic missiles. One of only a couple in the world.

After the Chernobyl disaster, plans were considered to destroy the Radar array, but it was determined that the size and weight might trigger a seismic event, so it was left in place.

Chernobyl power plant.... the sarcophagus was only recently completed, covering the exposed core and greatly diminishing ambient radiation nearby.

Pripyat town entrance sign... just around the corner from the power plant.

Pripyat town square. From the air you can sort of see the lines from what was likely a nice park during Soviet times.

Town square in Pripyat.... all the coolest buildings here. I flew the drone as close as I dared here.

Pripyat funfair... unfortunately it was never "officially" used. It was scheduled to open soon after the Chernobyl disaster.

Bumper cars in the unfair. You don't exactly want to be a complete chucklehead and climb into anything here. When you leave Pripyat, you are scanned for radiation. If you picked up any radioactive material on your clothing, you have to leave that clothing behind.

An intrepid (and talented) graffiti artist snuck in near the funfair in recent years.

We picked a random apartment building and browsed around a few floors. The "liquidators" emptied almost everything of value and buried it, dissuading looters and prior occupants from returning.

The apartment buildings were Silent Hill level eery... you almost expected fog to drift in and Pyramid head to come scraping his way down the hallway.

The Kindergarten/Preschool... This building is unique. For some reason, the liquidators didn't empty it. Nobody knows why. It's possible that there was a sentimental reason. It's possible that they ended up there at the end of the week and decided to have some beers and call it quits early. It's also possible that someone marked it off as "cleared" and it was overlooked. Regardless, the school sits this day exactly as it did in April of 1986.... slowly decaying and being reclaimed by the elements.

This place, our last stop. It was by far the most memorable of the whole trip: Pripyat Hospital. It is not generally open to visitors but we were taken there as part of private tour. The hospital is still HIGHLY radioactive and has not been cleared. It still sits exactly as it was the night of the disaster in April 1986.

Walking through different procedure and operating rooms, the chaotic spreads on tables & counters told a story, if you cared to look.

The remnants of frantic and futile resuscitation efforts are everywhere.

Finally, in some rooms... bedding and bandages with radiation levels that are orders of magnitude higher than anything else. This is the same stuff that was used to attempt to save the firefighters that night. The clothing of the firefighters is MUCH more radioactive and is in the basement.