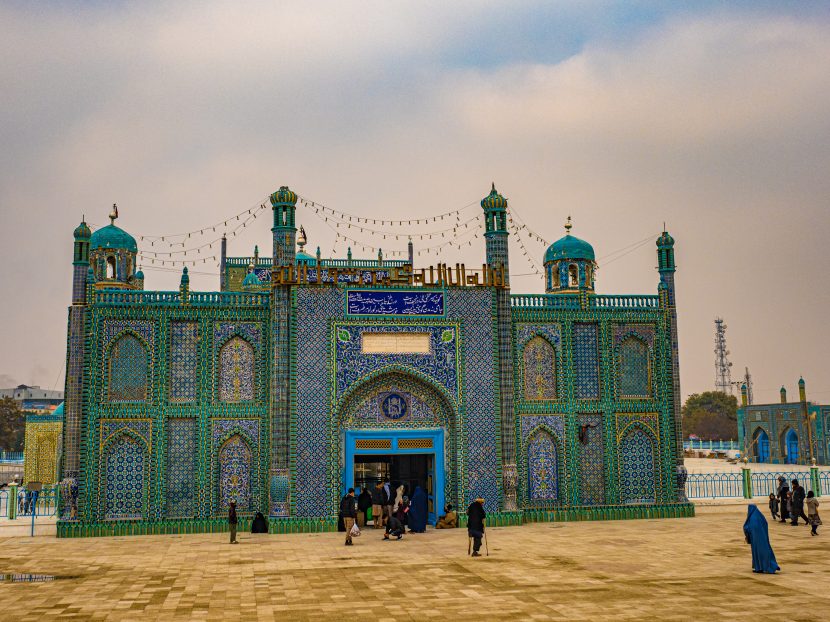 Beginning with the cancelled flight that routed us through Islamabad, we quickly learned that flights in Afghanistan can be unreliable. With only days left in Afghanistan, we turned our attention to the departing flight. At first search, it appeared that the Kabul to Istanbul direct flight had been cancelled. Thanks again, Turkish Airlines. Of course, by the time we had a backup plan in place, the direct flight was confirmed to be back on. This created a new problem for us though… we were in Masir-i-Sharif and planned to fly back possibly a day later. Now we needed to fly back immediately but there was no space. What did we do? We drove. Yeah… After hearing about the Taliban checkpoints around every corner, we embarked on a nine-hour road trip from Masir-i-Sharif back to Kabul.

Before that though, we did spend a little time in Masir-i-Sharif. While the town is supposed to be known for some great food, and we did get some Kebabs, Pulao, and some local specialties from a bustling local place a couple times… Afghani food was beginning to get a bit tiresome for us. Can I comment on how the Pulao in Masir is “better” than Kabul? Umm, no, I really can’t. The main sight to see in Masir of course is the Blue Mosque, also known as the Shrine of Hazrat Ali. This should have been a rather straightforward in-and-out tourist visit, but it proved much more interesting than expected. We arrived at the Blue Mosque along with crowds for noon prayers. As we got corralled into the fenced in line for the security check, I took note of the “no bags allowed” signs. My guide shrugged it off and said that they were haphazard with their enforcement of this. Shobana was in the women’s line, as everything is segregated of course. As luck would have it, the plainclothes security at this entrance was definitely not ok with a backpack, so we circled back and dropped it off. For try number two, the same guy said that cameras were prohibited. Rather than argue, we hopped in the car and drove around to a different entrance. At this entrance, it wasn’t plainclothes security but actual armed police. I had my Olympus camera shoulder-slung and tucked back to try and slide in discreetly. Nope. These guys went with the “no cameras allowed” schtick as well. Arguing ensued. A note on that: There is a lot of arguing in Afghanistan. The culture? The language? I don’t know. Anyway, it seemed like most interactions… meals, ticket purchases, hotel check-ins, haggling, taxi transport, never mind the police bribes and security checks…. it all involved a lot of hand waving and yelling. This was no exception. The arguing in Dari went on for a while. The language barrier kept me from understanding much in the moment other than a few occasional words like “American” mingled in there. Eventually, they had me turn on the camera, patted me down, checked under my Pakol (Afghani hat) and waved me through. So… what were their concerns? Two things: the camera could be a bomb and, more distressingly to them, I might be there to take creepshots of women at the mosque. The latter concern absolutely blew my mind. Say what you will about the treatment of women in Afghanistan… show up there and do something, however small, to diminish the modesty of local women and you’re gonna have a mob on your hands. A safe bet is to be cautious where you aim your camera. Oh, and the bomb thing… also a fair concern. Apparently, a cleric had been killed there by a guy with a bomb under his hat. He detonated the bomb when he knelt to kiss the cleric’s hand. All these shenanigans did take a few minutes, which definitely gave Shobana a little scare. It seems she was already making friends though and was smart enough to stay exactly where we last saw her. Also, low and behold, we ran into our friend Reza who had arrived on the same flight and seemed to pop up at every stop. This would be the last run-in though. After the tour of the mosque, it was time to hit the road. If getting stuck in remote mountainous Afghanistan was a bit surreal, this road trip was on another level. The main highway is flanked by little makeshift military outposts every mile or so. These were basic little Hesco structures with floodlights and gun turrets with some military vehicles ready for rapid deployment. Alongside the road, I saw a few blown up and burned up Humvees. For the first part of the trip, there was a sense of being a bit rushed. We had to skip over a few small stops. We were told that we had to get past a certain point because the Taliban sets up checkpoints after sunset. Naturally, my eyes were peeled watching for this spot. When the roadside military outposts started to get more frequent, I asked “Are we there yet?” No, that wasn’t the Taliban area. What about the blown up Humvees? Did we make it past the Taliban yet? …No, that wasn’t it either. Eventually, we passed a few small towns and villages that were bustling with activity. Most of the activity looked like the typical stuff that you’d expect in the developing world: densely packed produce vendors, freshly butchered animals, vehicle mechanics spilling into the roadside, shepherds bringing animals alongside farmers with carts of vegetables. Daily life, unvarnished. Amongst this though were men in traditional clothing nonchalantly carrying shoulder-slung automatic rifles. Was this the Taliban area? Still no. Eventually, the sunlight faded. I had gotten a bit relaxed and asked, oh yeah, what about that Taliban area? We passed it, and I didn’t even notice. This seems fitting of course, because the areas that are going to be a problem for you in Afghanistan are most likely going to look completely innocent. You won’t even notice. The stuff that looks totally crazy might not actually be a problem.

As it turns out, we made it back to Kabul without issues of course. That is, except for some feisty police looking for a bribe. We spent another night in Kabul at the cozy little backroom guesthouse that we’d gotten accustomed to. I personally wouldn’t have minded a couple more free days around Kabul to explore around with some help, but unfortunately our time had come to an end. We were a day early though and this gave some options. Additionally, since we weren’t sure about the viability of our direct flight, we had taken a PCR test before departing Kabul previously. At this point, we had a generously post-dated PCR test that would be our ticket to places with some pretty prohibitive entry restrictions. We weren’t certain where our next destination was going to be, other than that we weren’t going to just hang out in Istanbul for our remaining days. Alas, we made it through Afghanistan unscathed and had a pretty good time in the process. Would I go back? Actually, probably yes, but in the summertime. While the food did leave a bit to be desired, the hospitality was excellent, the countryside was gorgeous, and the country was far safer and accessible than I imagined.

One thought on “That Camera Could Be A Bomb, Sir”